The gene expression of marine bacteria can be a valuable sensor for discovering environmental changes caused by humans. Furthermore, bacteria help to clean our oceans and hopefully they could be used to purify drinking water from harmful environmental toxins in the future. This is shown in a new dissertation in marine microbial ecology by Christofer Osbeck at Linnaeus University.

Marine bacteria are highly abundant and are present in all marine ecosystems, where they, as decomposers of organic material, play a critical role when it comes to regulation of the energy flow and nutrient cycles. Marine bacteria are for instance, key players in the cycling of nitrogen and phosphorus, and they create vitamins that algae and other marine living organisms are dependent on.

Bacteria respond quickly to environmental changes in our oceans. It can take anything from just a few hours up to a couple of days. In his dissertation, Christofer Osbeck and his colleagues have studied how bacteria respond to ocean acidification, organic pollution, and dissolved organic carbon. Through DNA sequencing in the Baltic Sea, they have studied how bacteria regulate their genes in order to adjust their metabolism to cope with the environmental changes.

“In the long term, we may be able to use the expression or presences of bacterial genes for environmental monitoring in the Baltic Sea, and elsewhere. The basic idea would be to take a water sample in an area and then analyze the DNA content. More or less like a blood sample from a human being, in order to get information on different diseases. You could have a fixed sampling station, like our Linnaeus Microbial Observatory (LMO), where you regularly collect samples and analyze the results. “In this way, you can see change over time”, explains Christofer Osbeck.

It is already known that bacteria respond to different types of environmental toxins, like oil, which they can use as a food source. However, this was the first time anyone studied how bacteria responded genetically to PFAS (perflourinated alkylated substances). PFAS is a group of over 4,700 chemicals that are water and dirt repellent and used, for instance, as surface treatment in many products, like fire-fighting foams, impregnated textiles, shoes, food packaging, beauty products, electronics, and more.

“In our experiments, we saw a strong genetic response when bacteria was exposed to PFAS treatment. I’m very interested in doing further research on how bacteria could be used to decompose new and harmful environment toxins like PFAS and chlorinated paraffins. I think the best way to do this is to start testing on a smaller scale in a laboratory and then increase the activities step by step. Treatment plants already use pools where bacteria help decompose and concentrate dissolved organic material that is found in the sewage water. An approach similar to this could be a first possible step”, Osbeck concludes. 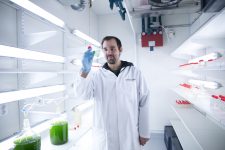 The Rectors, Presidents and Vice-Chancellors from seven of Europe’s leading universities met in Köln (Germany) to launch their shared vision for improving European citizens’ quality of life by creating a European University for Well-Being. Through top level education and research, the alliance will help to create an environment that allows for European citizens and their […]

Researchers: The research on how a growing global population should be provided with food has been lacking a holistic perspective

Meeting one of the great challenges of our time – providing a growing global population with food – requires research with a holistic perspective on food production, people’s eating habits, and the population increase. However, during the last few decades, the world’s researchers have primarily focused on the first of these factors, and more or […]

A new method for dating ancient earthquakes and rock fracturing

Constraining the history of earthquakes produced by bedrock fracturing is important for predicting seismic activity and plate tectonic evolution. In a new study published in the Nature journal Scientific Reports, a team of researchers presents a new microscale technique to determine the age of crystals grown during repeated activation of natural rock fractures over a […]

Long-term partnership to promote forestry and the forest industry

Södra and IKEA of Sweden are now partnering with Linnaeus University in a unique long-term and strategic investment in research and education to promote forestry and the forest industry. “We operate in a region, and a country, in which forests and forest products play a major role in people’s daily lives, as well as the […]