Beta blockers can repair malformed blood vessels in the brain

Propranolol, a drug that is efficacious against infantile haemangiomas (“strawberry naevi”, resembling birthmarks), can also be used to treat cerebral cavernous malformations, a condition characterised by misshapen blood vessels in the brain and elsewhere. This has been shown by researchers at Uppsala University in a new study published in the scientific journal Stroke.

“Up to now, there’s been no drug treatment for these patients, so our results may become hugely important for them,” says Peetra Magnusson of the University’s Department of Immunology, Genetics and Pathology, who headed the study.

Cerebral cavernous malformations (CCMs, also called cavernous angiomas or cavernomas) are vascular lesions on blood vessels in the brain and elsewhere, caused by genetic changes that may be hereditary or arise spontaneously. Today, an operation to remove these lesions is the only possible treatment. However, surgical interventions in the brain are highly risky. Since the vascular malformations, moreover, recur in the hereditary form of the condition, a drug treatment for CCMs is urgently required instead.

The uses of propranolol, a beta blocker, include treating cardiovascular diseases and conditions, such as high blood pressure. But it can also be used to treat a haemangioma (“strawberry naevus”), a common blood-vessel malformation in children. There are some indications that the preparation might work against CCMs as well.

The new study is a collaboration involving researchers at Uppsala University, the Swedish University of Agricultural Sciences and, in Italy, IFOM – The FIRC Institute of Molecular Oncology and the Mario Negri Institute of Pharmacological Research. The researchers have been investigating how propranolol affects the emergence of vascular lesions in the form of CCMs.

“We examined mice with vascular malformations in the brain – cavernomas or CCMs, as they’re called – that corresponded to the hereditary form of the condition in humans. The mice were given propranolol in their drinking water, and we were able to see that the cavernomas were becoming fewer and smaller. The blood vessels functioned better, too, with less leaking and improved contacts between their cells,” Magnusson says.

The propranolol dose administered to the animals was equivalent to the dose used to treat diseases in humans. Using an electron microscope, the researchers were able to study in detail how the drug affected the cavernomas.

The results show that propranolol can be used to shrink and stabilise vascular lesions, and may be a potential medicine for treating CCMs.

“What makes the study especially interesting is that right now, in Italy, a clinical study is under way in which CCM patients are to get two years’ treatment with propranolol. During this period, they’re being monitored by means of magnetic resonance imaging of the blood vessels, to see how the malformations are developing,” says Professor Elisabetta Dejana of Uppsala University’s Department of Immunology, Genetics and Pathology and IFOM in Italy.

Dejana heads the research group at Uppsala University that has been working on the new study, and is also taking part in the ongoing clinical study in Italy. 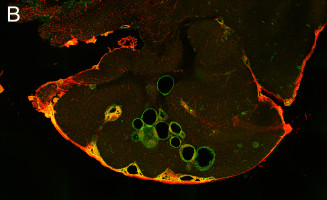 Researchers at Uppsala University have created the first 3D map of the hearing nerve showing where the various sound frequencies are captured. Using what is known as synchrotron X-ray imaging, they were able to trace the fine nerve threads and the vibrating auditory organ, the cochlea, and find out exactly how the frequencies of incoming sound are distributed.

In patients with severe COVID-19, the innate immune system overreacts. This overreaction may underlie the formation of blood clots (thrombi) and deterioration in oxygen saturation that affect the patients. This is shown in an Uppsala University study published in the journal Frontiers in Immunology.

The effects of the endocrine disruptor linuron on frogs are not limited to those exposed, but are passed on to their offspring (reduced body weight and decreased fertility) and grand-offspring (increased body weight and a disrupted metabolism). This is demonstrated by a new study (Uppsala University and Stockholm University), published in the journal Science of the Total Environment.

Researchers from Uppsala University show in a new study that inhibition of the protein EZH2 can reduce the growth of cancer cells in the blood cancer multiple myeloma. The reduction is caused by changes in the cancer cells’ metabolism. These changes can be used as markers to discriminate whether a patient would respond to treatment by EZH2 inhibition.