Periwinkles, struggling to survive the seashore battleground, have developed a genetic ‘toolkit’ to help them adapt to different environments, a new study shows.

This toolkit has enabled the snail to develop different characteristics according to whether it lives mainly on parts of the sea shore where crabs are a constant threat, or in rocky places where it is disturbed by waves.

A team of researchers from the University of Sheffield, in the UK, and the University of Gothenburg, in Sweden, investigated hundreds of rough periwinkles, collected from seashores on the west coast of Sweden. They noted their shell form and exact position on the shore, and then analysed their genomes to try to find out how these adaptations occurred to give the snails the best chance of survival.

The results, published in Evolution Letters, showed the snails’ characteristics changed significantly at the point on the shore where the crabs disappear and the wave action gets stronger.

Kerstin Johannesson, leader of the Swedish team explains: “Either side of the habitat transition, the snails look like different species. Snails on the boulder shore have thicker shells, which are a better defence against crabs. The smaller, cliff shells have a wide opening, so the snail’s foot can attach more securely to rocks, to defend against waves. And across 10-20m of shore in between these areas, we found all kinds of intermediate forms.”

But when the team analysed the periwinkles’ genetic data to try to discover how these changes occurred, they uncovered some surprising results.
They identified around 1,000 genes that differed between snails in the ‘crab’ and ‘wave’ environments but, instead of being spread throughout the genome, most of them were clustered in specific regions across just three chromosomes. The researchers concluded that the chromosomes were holding together sets of genes to help the snails adapt to different environments.

“This study gives us a fascinating insight into how animals and plants might cope when faced with contrasting environments,” says Professor Roger Butlin, of Sheffield’s Department of Animal and Plant Sciences who is guest professor at University of Gothenburg and leads the study. “Rather than many genes having to respond separately to natural selection, this creates a ready-made ‘toolkit’ on these three chromosomes that has allowed the snail to adapt more rapidly.”

The sea shore in Sweden could only have been colonised by the periwinkles some time after the end of the last ice age, around 5-6,000 years ago. As periwinkles reproduce annually, that means these adaptations must have occurred within 5-6,000 generations– a rapid change in evolutionary terms.

The team is now looking at other shores around Europe to investigate how widely the same adaptive toolkit is used by the periwinkles. They are also looking at other species of periwinkle to find out more about how the sets of genes were put together.

“Our aim is to better understand the origin of the species, but also to understand how quickly animals and plants are able to cope with environmental challenges,” adds Professor Butlin.
The research was funded by the Natural Environment Research Council in the UK, and the Swedish Research Council. 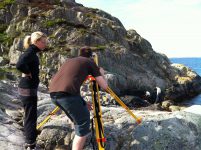 Older people’s risk of recurrent fractures decreases by 18 percent if the care they receive is more structured and preventive, through fracture liaison services. This is shown by a study from the University of Gothenburg. Sweden and the Nordic region in general rank high in international statistics on osteoporotic (fragility) fractures among the over-50s. After […]

Surgical treatment of obesity is as effective for individuals who developed the disorder early, by the age of 20, as for those who have developed obesity later in life, a study from the University of Gothenburg shows. The results, published in the journal Diabetes Care, are based on data from the Swedish Obese Subjects (SOS) […]

The Swedish team responsible for uterine transplantation research has, for the first time, transplanted a uterus from a deceased donor. The operation proceeded without complications and the recipient is doing well. The transplant was done in December 2019 under the supervision of Mats Brännström, consultant physician and professor of obstetrics and gynecology at the University […]