Big tidal ranges some 400 million years ago may have initiated the evolution of bony fish and land vertebrates. This theory is now supported by researchers in the UK and at Uppsala University who, for the first time, have used established mathematical models to simulate tides on Earth during this period. The study has been published in Proceedings of the Royal Society A.

“During long periods of the Earth’s history, we’ve had small tidal ranges. But in the Late Silurian and Early Devonian, they seem to have been large in some parts of the world. These results appear highly robust, because even if we changed model variables such as ocean depth, we got the same patterns,” says Per Ahlberg, professor of evolutionary organismal biology at Uppsala University.

Between 420 and 380 million years ago (Ma) – that is, during the end of one geological period, the Silurian, and beginning of the next, the Devonian – Earth was a completely different world from now. Instead of today’s well-known continents there were other land masses, clustered in the Southern Hemisphere. Stretching across the South Pole was the huge continent of Gondwana. North of it was another big one known as Laurussia, and squeezed between the two were a few small continents. Other salient differences compared with now were that Earth’s day lasted only 21 hours, since our planet revolved faster on its own axis, and the Moon looked much larger because its orbit was closer to Earth.

Life on land had gradually begun to get established. But the vertebrates, then consisting only of various kinds of fish, were still to be found only in the oceans. Then, during the Devonian, immense diversification of fish took place. One group to emerge was the bony fish, which make up more than 95 per cent of all fish today but were also the ancestors of terrestrial vertebrates. The earliest bony fish were the first animals to evolve lungs. What set off the evolution of bony fish, and how some of them started to adapt to a life on land, has not been clarified. One theory is that it happened in tidal environments where, in some periods, fish had been isolated in pools as a result of particularly large tides. This challenging habitat may have driven the evolution of lungs and, later on, the transformation of fins into front and hind legs.

To test this tidal theory, researchers at Uppsala University, in collaboration with colleagues from the Universities of Oxford and (in Wales) Bangor, used an established mathematical model of the tidal system for the first time to simulate, in detail, the tides in the Late Silurian and Early Devonian. Data on the positions of the continents, the distance of the Moon, the duration of Earth’s day, our planet’s gravity and the physical properties of seawater were fed into the model. These simulations showed unequivocally that the period, just like that of the present day, was one when large tides occurred in some places. The small continent of South China on the Equator showed a difference of more than four metres in sea level between high and low tide. The existence of tides at the time has previously been verified through studies of geological strata, but determining the extent of the difference between low and high tide has not been feasible. To researchers this news has been interesting, since fossil finds indicate that it was specifically around South China that bony fish originated.

“Our results open the door to further and even more detailed tidal analyses of key episodes in Earth’s past. The method can be used to explore the possible role of tides in other evolutionary processes of vertebrate development. And perhaps, conversely, whether tides, with their influence on ocean dynamics, played a part in the big marine extinctions that have taken place again and again in Earth’s history,” Ahlberg says.

Gondwana was a gigantic continent in the Southern Hemisphere that comprised what are now Antarctica, South America, Africa, the Arabian Peninsula, Madagascar, India, Australia, New Guinea, New Zealand and New Caledonia. Formed some 550 million years ago (Ma), Gondwana existed until about 180 Ma. Latterly during this period, Gondwana was part of Pangaea, the supercontinent in which all the continents were joined.

Laurussia, which lay north of Gondwana, was formed roughly 400 Ma and consisted of present-day North America, Greenland and Scandinavia. Some 250 Ma, it collided with Gondwana and Siberia, giving rise to Pangaea. 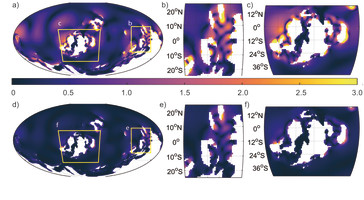