A new mathematical model for predicting variations in solar irradiance has been developed at Uppsala University. It may help to promote more efficient use of electricity from solar energy. In tests of various data models, the model proved capable of making highly reliable forecasts, and emerged as the best for this purpose in some respects. The results have now been published in two articles in the journal Solar Energy.

As clouds pass overhead, solar power generation from a photovoltaic system fluctuates from one minute to the next. Local producers of their own solar energy (for a single property, for example) wishing want to adjust their electricity use according to supply may need to know, in detail, how the amount of sunlight is changing. Forecasts of solar irradiance (the amount of solar radiation reaching a given surface, measured in watts per square metre, W/m2) may be a way of achieving greater control of solar power production.

Project leader Joakim Munkhammar of the Department of Civil and Industrial Engineering at Uppsala University explains.

“Our ‘MCM model’, as it’s called, serves to predict what will happen in the next minute, hour or day, based on what usually follows a particular solar irradiance level. This model has a simple design, is easy to train and use, and provides surprisingly accurate solar irradiance forecasts.”

The model, presented to the scientific community last year, is based on a “hidden Markov model” – that is, a statistical model for recognition and probabilistic forecasting of processes and patterns. The MCM (Markov chain mixture) distribution model divides solar irradiance into levels and calculates the probabilities of sunlight in the next and subsequent time periods being at the various levels. On this basis, it is possible to forecast when, and between which levels, sunlight will vary, and to compare the forecasts with actual observations to see how well the former match reality.

The model has now been tested by both scientists who have worked on it previously and other researchers. This has included test runs to compare the model with several other models. In one study, in which the model and five established benchmark models (used for comparison, to evaluate the relative performance of new models) were tested, the new MCM model yielded the most reliable forecasts, especially for the near future.

The Uppsala researchers now hope it will be feasible to use their model to control technical systems.

“We look forward to working with other scientists and companies on testing the model with real physical systems, such as those for battery energy storage. We’re going to try and boost the cost-effectiveness of storage systems by adjusting the charge, based on forecasts of local solar power generation,” Munkhammar says.

The project, titled Development and Evaluation of Forecasting Models for Solar Power and Electricity use over Space and Time, is funded by the Swedish Energy Agency and will run until year-end 2020. It involves three collaborating partners: Uppsala University, the Foundation for Collaboration between the Universities in Uppsala, Business, and the Public Sector (STUNS in Swedish) and the Uppsala Region. 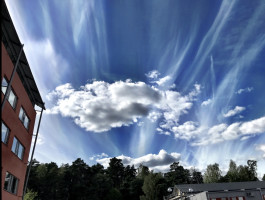 The evolution of our teeth began among ancient armoured fishes more than 400 million years ago. In the scientific journal Science, an international team led by researchers from Uppsala University presents ground-breaking findings about these earliest jawed vertebrates. Using powerful X-ray imaging, they show that unique fossils found near Prague contain surprisingly modern-looking teeth.

Characteristics of palm trees differ from those of other tropical trees in many ways. In a major new study led by scientists at Uppsala University, Sweden, and University of Campinas, Brazil, they have surveyed the actual numbers of palms in tropical rainforests around the globe.

Scientists at Uppsala University have discovered a hitherto unknown function of blood platelets in cancer. In mouse models, these platelets have proved to help preserve the vascular barrier which makes blood-vessel walls selectively impermeable, thereby reducing the spread of tumour cells to other parts of the body. The study is published in the journal Cancer Research.

Life depends on an intricate game of hide-and-seek taking place inside the cell. New research, which is now published in the journal Nature, sheds light on the mechanisms with which DNA-binding proteins search the genome for their specific binding sites.