Scientists at Uppsala University have discovered a hitherto unknown function of blood platelets in cancer. In mouse models, these platelets have proved to help preserve the vascular barrier which makes blood-vessel walls selectively impermeable, thereby reducing the spread of tumour cells to other parts of the body. The study is published in the journal Cancer Research.

Platelets, or thrombocytes, as they are also termed, are tiny cell fragments that form in the bone marrow and circulate in the blood. If we are injured and start bleeding they clump together, sealing off the wound while also helping the blood to coagulate.

In the study, the researchers investigated what happens when the PDGFB in platelets, but not in other cell types, is deleted in individuals with cancer. PDGFB from platelets was found to be essential, to attract supporting cells to the tumour blood vessels. In healthy tissue, on the other hand, the platelets did not to perform this function. If PDGFB was lacking in platelets, the quantity of circulating tumour cells increased and they spread to other parts of the body to a much higher degree.

Previous studies have shown that PDGFB from cells of another kind, endothelial cells that line the inside of blood vessels, is necessary to attract supporting cells to the vessels when they form. According to the new study, this function in tumours also requires PDGFB from platelets, which distinguishes them from healthy tissue.

From a medical point of view, it may be advantageous, in some situations, to reduce platelet activity in order to prevent blood clots, for example. Moreover, previous research shows that platelets can promote spread of tumour cells.

“Our data show that platelet activation in cancer is not altogether harmful. Instead, the PDGFB released when the platelets are activated can help to maintain the vascular barrier in tumours, thereby counteracting the spread of tumour cells. That makes it important for the specific functions of the various platelet-derived molecules to be taken into consideration when new therapies are developed,” says Anna-Karin Olsson, who leads a research group at the Department of Medical Biochemistry and Microbiology at Uppsala University. 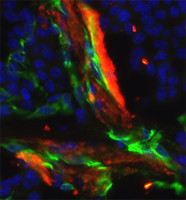 The evolution of our teeth began among ancient armoured fishes more than 400 million years ago. In the scientific journal Science, an international team led by researchers from Uppsala University presents ground-breaking findings about these earliest jawed vertebrates. Using powerful X-ray imaging, they show that unique fossils found near Prague contain surprisingly modern-looking teeth.

Characteristics of palm trees differ from those of other tropical trees in many ways. In a major new study led by scientists at Uppsala University, Sweden, and University of Campinas, Brazil, they have surveyed the actual numbers of palms in tropical rainforests around the globe.

A new mathematical model for predicting variations in solar irradiance has been developed at Uppsala University. It may help to promote more efficient use of electricity from solar energy. In tests of various data models, the model proved capable of making highly reliable forecasts, and emerged as the best for this purpose in some respects.

Life depends on an intricate game of hide-and-seek taking place inside the cell. New research, which is now published in the journal Nature, sheds light on the mechanisms with which DNA-binding proteins search the genome for their specific binding sites.