Europe faces a serious shortage of expertise within nuclear safety. Several authorities and organisations have already highlighted the dangerous lack of competence in this area. Now, the EU programme Euratom is investing around 5 million euros to educate a new generation in nuclear technology. At the heart of the initiatives, which will contain significant distance learning elements, are researchers from Chalmers University of Technology.

The programme covers two major educational projects, of which Chalmers will coordinate one and participate as a partner in the other. Both aim to maintain competence in, respectively, reactor physics and nuclear chemistry.

“If we do not maintain a sufficient level of knowledge and expertise, this could be a safety and security risk. There are more than a hundred nuclear reactors currently operating across Europe, which account for more than 25 percent of all electricity generation,” says Christophe Demazière, Professor at the Department of Physics at Chalmers and coordinator of the EU project Great Pioneer.

The teaching of the three-year EU project Great Pioneer is based on innovative and successful methods in active and distance learning. Coordinator Christophe Demazière has developed these methods for many years, in close collaboration with two pedagogical researchers at Chalmers University of Technology’s Department of Communication and Learning in Science: Associate Professors Christian Stöhr and Professor Tom Adawi. Recently, the researchers presented the results of their extensive collaboration in the scientific journal Computers & Education. Work will continue within the framework of the new EU project as the education models are now being exported.

In the coming years, approximately 600 students at universities across Europe will be able to take courses in reactor physics and reactor safety, looking at both theory and practice, programming principles in nuclear safety and using training reactors. The concept is based on the students preparing outside of lectures, so that the teaching time can then be used for joint activities with the students at the centre – whether they are on site or at a distance. A total of nine courses are planned through Great Pioneer, of which Chalmers will produce six.

The opportunity for distance education is also an important component of the second EU project, in which Chalmers acts a partner.

“Nuclear engineering programmes are being phased out across Europe, as there are not enough students. Instead of each educational institution trying to offer its own programmes, we will merge and create a sustainable, long-term educational network across Europe,” says Teodora Retegan Vollmer, Professor in Nuclear Chemistry at the Department of Chemistry and Chemical Engineering and Chalmers’ representative for the EU project A-CINCH (Augmented cooperation in education and training in nuclear and radiochemistry).

She has been working on educational projects in the EU since 2010, when she was one of the initiators of the Cinch concept. The new project includes developments such as virtual laboratory exercises that students can perform remotely. Chalmers also offers unique educational opportunities in the safe handling of meaningful quantities of radioactive materials.

“Whether you are building or decommissioning nuclear reactors, this training is crucial for being able to do it safely,” says Teodora Retegan Vollmer.

There has not been a master’s degree in nuclear engineering at Chalmers for the last few years, but the two new EU projects evidence how the expertise is in international demand.

“The goal of the educational projects is to create long-term sustainable education, where we can share both teachers and students, and work with pedagogical methods to improve learning. This is crucial in attracting students and ensuring that the reactors currently in operation can continue safely in the long-term,” says Christophe Demazière.

The EU decisions on the funded education projects become official once all participants have signed the agreement, a process which is currently underway.

A shortage of expertise in nuclear technology

As nuclear power plants are decommissioned, interest in nuclear technology education has diminished throughout Europe. This has led several authorities and organisations, including the European Commission and the International Atomic Energy Agency (IAEA), to sound the alarm that a new generation of qualified researchers and specialists is needed to ensure nuclear safety. The Swedish Radiation Safety Authority (SSM) and the Swedish National Council for Nuclear Waste have voiced similar concerns.

A report from SSM makes clear the nuclear industry’s great need for more experts in the next fifteen years. There is also a growing need for radiation science specialists, within areas such as healthcare. Within the Swedish nuclear industry and healthcare sector, a growing proportion of the expert workforce is expected to retire within a few years.

The same trend is evident throughout Europe. As early as 2012 the Joint Research Center (JRC) warned the European Commission that there would be a shortage of around 7000 reactor physics and nuclear safety specialists by 2020. Since the report was written, several training programmes in the area have disappeared, contributing to increasing the shortfall further still.

The new education projects within the EU: Great Pioneer and A-CINCH

The project “GRE@T-PIONEeR” (Graduate Education Alliance for Teaching the Physics and Safety of Nuclear Reactors) is aimed at master’s students, doctoral students, postdoctoral researchers and nuclear engineers. The concept is based on active learning and the course elements can be followed either on site or at a distance. It is coordinated by Chalmers University of Technology and Professor Christophe Demazière, who since 2017 has also led the EU project Cortex.

A-CINCH (Augmented cooperation in education and training in nuclear and radiochemistry) will train about a hundred European students and specialists. The project is coordinated by the Czech Technical University in Prague.

Both educational programmes run for three years, and consist of theory, practical elements and distance education.

The projects have received EU funding under the Euratom work programme 2019-2020 and are part of the Horizon 2020 framework. The consortium of the projects has been granted EUR 2.3 million each for three years (a total of approximately SEK 50 million). Chalmers is awarded SEK 6.3 million for Great Pioneer and just under SEK 3 million for A-CINCH.

Chalmers Professor Christophe Demazière has recently written a book aimed at both future and current engineers in nuclear technology and nuclear safety.

Read more about the pedagogical methods on which Great Pioneer is based, in the scientific article “The polarizing effect of the online flipped classroom” in the journal Computers & Education.

Read the Swedish National Council for Nuclear Waste’s report “The state of knowledge in the nuclear waste area 2020. Step by step. Where are we? Where are we going?”

Chalmers has taken the initiative for a knowledge package aimed at secondary schools: “Radiation science for the curious”. The training package has been developed in collaboration with an academic competence center for radiation science, SAINT, and led by nuclear energy researcher Klara Insulander Björk at Chalmers’ Department of Physics. Read more about the education initiative here.

Chalmers University of Technology in Gothenburg conducts research and education in technology and natural sciences at a high international level. The university has 3100 employees and 10,000 students, and offers education in engineering, science, shipping and architecture. 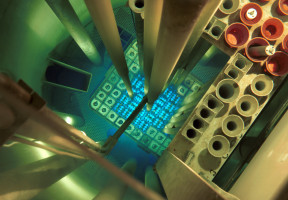 In sufferers of Parkinson’s disease, clumps of α-synuclein (alpha-synuclein), sometimes known as the ‘Parkinson’s protein’, are found in the brain. These destroy cell membranes, eventually resulting in cell death. Now, a new method developed at Chalmers University of Technology, Sweden, reveals how the composition of cell membranes seems to be a decisive factor for how α-synuclein causes damage.

Iron fortification of food is a cost-effective method of preventing iron deficiency. But finding iron compounds that are easily absorbed by the intestine without compromising food quality is a major challenge. Now, studies from Chalmers University of Technology, ETH Zurich and Nestlé show a brand-new iron compound, that could meet the criteria.

In the future, camera lenses could be thousands of times thinner and significantly less resource-intensive to manufacture. Researchers from Chalmers University of Technology, Sweden, now present a new technology for making the artificial materials known as ‘metasurfaces’, consisting of interacting nanoparticles that together can control light. They could have great use in future optical technology

Solid state batteries are of great interest to the electric vehicle industry. Scientists at Chalmers University of Technology, Sweden, and Xi’an Jiaotong University, China now present a new way of bringing this promising concept closer to application. An interlayer, made of a spreadable, ‘butter-like’ material helps improve the current density tenfold, while also increasing performance and safety.