Distrust in politicians and the political system is preventing people from supporting increased taxes on fossil fuels, a potentially important climate policy. By comparison, most people believe in climate change. So says a new study based on surveys in 23 European countries. “What we found is that political distrust is currently a more serious barrier to climate action than is simple denial of the problem,” says Malcolm Fairbrother, one of the authors of the study.

The study, by researchers at Umeå University, Sweden, was published in the scientific journal Global Environmental Change. Fairbrother and the study’s other authors, Ingemar Johansson Sevä and Joakim Kulin, received funding for their work from the Marianne and Marcus Wallenberg Foundation, the Swedish Research Council, and Riksbankens Jubileumsfond.

Using data from the European Social Survey, they found that three-quarters of Europeans believe in climate change and its dangers, but only about one-third support increasing taxes on fossil fuels. They found that political trust differs much more across countries than beliefs about climate change. In high-trust countries like Sweden people are more open to high taxes on fossil fuels. On the other hand, in European countries with little political trust, like Poland or Spain, even people who believe in climate change do not support increasing these taxes.

The taxation of fossil fuels like coal, petrol, or natural gas is a way governments can make polluters pay for their carbon pollution. Environmental economists have been saying for decades that taxes are an effective way of discouraging polluting activities. And governments can reduce other taxes to compensate, making environmental taxes a win-win solution.

This new study shows why this solution, however, remains surprisingly unpopular with the general public—especially in countries with low political trust.

Umeå University is one of Sweden’s largest institutions of higher learning with over 33,000 students and 4,000 employees. We have a well-established international research profile and a broad range of study options. Our campus constitutes an inspiring environment that encourages interdisciplinary meetings – between students, researchers, teachers and external stakeholders. Through collaboration with other members of society, we contribute to the development and strengthen the quality of our research and education. 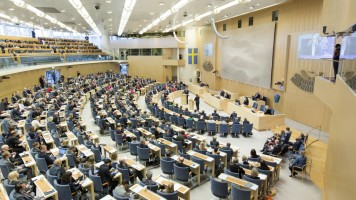 Northern peatlands hold large stocks of carbon and nitrogen and thus play a key role in global climate dynamics. However, their vulnerability to climate warming is uncertain, due in part to a lack of spatially explicit, observation-based peatland maps. This is shown in a study published in PNAS of among others researchers at Umeå University.

A key uncertainty in climate projections is the amount of carbon emitted by thawing permafrost in the Arctic. Plant roots in soil stimulate microbial decomposition, a mechanism called the priming effect. An international research team shows that the priming effect alone can cause emission of 40 billion tonnes carbon from permafrost by 2100. The study was published today in Nature Geoscience.

Women constitute only 27 percent of academics with the rank of professor in Sweden, in spite of several decades of equal opportunities promotion efforts. “A common explanation is that women’s achievements are valued less than men’s,” says Guy Madison, one of the authors of a new study from Umeå University.

Autonomous forestry and farming: how close we are?

Autonomous systems can increase performance, reduce injury risk, save energy and money, and reduce the need for labor in agriculture and forestry. Ahmad Ostovar has developed methods and algorithms for systems with the capacity for automatic detection and recognition of objects in outdoor environments. He defends his thesis on December 5 at Umeå University, Sweden.