An international study led from Karolinska Institutet in Sweden provides new insights into the regulatory T cells’ role in protecting against autoimmune disease. By mapping the targets of the immune system in patients with the rare disease IPEX, they were able to show that regulatory T cells control immunotolerance in the gut. The results are published in the Journal of Allergy and Clinical Immunology. 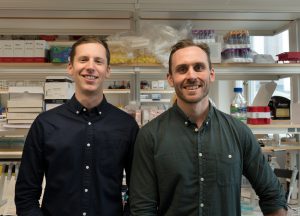 Patients with the rare disease IPEX lack regulatory T cells and develop serious autoimmune diseases in which the immune system attacks the body’s own tissue, such as type 1 diabetes, enteritis and dermatitis. In studies of 17 patients with IPEX, a research group at Karolinska Institutet has now been able to define which self-molecules are targeted by the immune system when regulatory T cells are lacking.

“Gut-related proteins were significantly over-represented amongst the target molecules we identified. We interpret this as regulatory T cells having a particularly important function in regulating the immune system in the gut,” says corresponding author Daniel Eriksson, researcher at the Department of Medicine, Karolinska Institutet (Solna). “Our findings fit well with clinical presentation of the disease, in which symptoms from the gut dominate.”

The researchers took advantage of a method that makes it possible to examine the immune response against 9,000 proteins in parallel.

“Our study is the first large-scale assay of how the immune system attacks the organs of IPEX patients,” says Dr Eriksson.

Regulatory T cells have been called the “police” of the immune system, as they can prevent other immune cells from attacking the body’s own tissues, discoveries that were awarded the 2017 Crafoord Prize.

“We hope that our results will make it easier to diagnose patients with IPEX and monitor them during treatment,” says Nils Landegren, researcher at the same department and the study’s last author. “The next question is how understanding of regulatory T cell function can be used for developing new treatments for autoimmune diseases.”

The study was conducted in close collaboration with numerous international researchers from Stanford University School of Medicine and elsewhere. It was financed by several bodies, including the Swedish Research Council, Region Stockholm, the Swedish Society for Medical Research (SSMF), the Crafoord foundation, and the Torsten and Ragnar Söderberg Foundation.

The Press Office at Karolinska Institutets

Only about five per cent of the babies born to mothers with hepatitis C are themselves infected by the disease. A possible reason for this low figure is that the baby’s immune system has already destroyed the virus before birth. A new study from researchers at KI and published in the journal Gut reveals clear […]

People with celiac disease have increased risk of dying prematurely, despite increased awareness of the disease in recent years and better access to gluten-free food. This is according to a new study from Karolinska Institutet in Sweden and Columbia University in the U.S. published in the prestigious journal JAMA. Celiac disease was linked to increased […]

Cytokines are a type of proteins that are important to the signaling between cells in the body’s immune system, for example in the case of an infection or injury. A new study which is being published in the Journal of Allergy and Clinical Immunology is now indicating that the cytokine interleukin(IL)-26 could be used as a biological marker (biomarker) for uncontrolled asthma in both adults and children – and could perhaps also be a future goal for new drugs against asthma. These results are presented by researchers at Karolinska Institutet and Lund University.

Fat-soluble statins can prevent liver cancer and reduce mortality in patients with chronic viral hepatitis. These are findings from a study conducted by researchers at Karolinska Institutet in Sweden, among others. The study is published in Annals of Internal Medicine.