Using a computer algorithm, scientists at Uppsala University have identified a promising new treatment for neuroblastoma. This form of cancer in children, which occurs in specialised nerve cells in the sympathetic nervous system, may be life-threatening. In the long term the discovery, described in the latest issue of the scientific journal Nature Communications, may result in a new form of treatment for children in whom the disease is severe or at an advanced stage.

The new treatment is based on activating a receptor protein, CNR2 (cannabinoid receptor 2), in the nervous system. A highly unusual method enabled this particular protein to be applied therapeutically. Instead of using traditional methods of drug development, this research group has developed a new computer algorithm capable of combining massive quantities of genetic and pharmacological data (‘big data’) from European and American hospitals and universities. The algorithm then suggested new treatments that could influence the basic mechanisms of the disease.

“We were astonished when the algorithm came up with completely new ideas for treatment, such as CNR2, that no one has ever discussed in this context. So we decided to investigate this further in the lab,” says Sven Nelander, senior lecturer at Uppsala University’s Department of Immunology, Genetics and Pathology, who is in charge of the study.

The new treatments were investigated using cell samples from patients and in animal models, where they proved efficacious. The cancer cells’ survival rate declined, for example, and tumour growth in zebrafish (Danio rerio) decreased, following treatment with a substance that stimulates CNR2.

The researchers have also developed the computer algorithm to enable it to be applied to other forms of cancer.

“Smart algorithms will be increasingly important in cancer research in the years ahead, since they can help us scientists to find unexpected angles. We’ve already started a major project here in Uppsala, in which several types of cancer in children and adults will be investigated this way. Our hope is that this can result in more unexpected treatment options,” Nelander says.

The study was carried out in collaboration with researchers at Karolinska Institute, Lund University and Chalmers University of Technology. 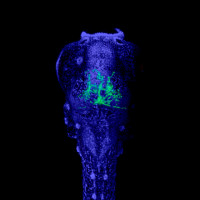 A preliminary study by researchers at Uppsala University has found that when young, healthy men were deprived of just one night of sleep, they had higher levels of tau – a biomarker for Alzheimer’s disease – in their blood than when they had a full, uninterrupted night of rest. The study is published in the medical journal Neurology.

New evolutionary insights into the early development of songbirds

An international team led by Alexander Suh at Uppsala University has sequenced a chromosome in zebra finches called the germline-restricted chromosome (GRC). The researchers found that the GRC is tens of millions of years old and plays a key role in songbird biology, having collected genes used for embryonic development.

Medication prescribed for a certain type of epilepsy may offer a new method for treating malignant infantile brain tumours. A specific mTOR inhibitor has the ability to cross the blood–brain barrier to both reach and attack the tumour at source. This has been demonstrated by researchers from Uppsala University, in collaboration with US and UK colleagues, and is published in Cell Stem Cell.

A new study from Uppsala University shows that whole-genome sequencing increases the precision of genetic studies, which in turn can improve our understanding of how to use biomarkers to discover disease. The results are published in the scientific journal Scientific Reports.