It is the bacterial changes in the gut that increase the levels of imidazole propionate, the molecule that makes the body’s cells resistant to insulin in type 2 diabetes. This result emerges from a European study, MetaCardis.

The gut and its bacteria are considered important in many diseases and several studies have shown that the gut microbiota affects the breakdown of several different parts of our diet. In previous research on gut microbiota and type 2 diabetes, the focus has often been on butyric acid-producing dietary fibers and their possible effects on blood sugar regulation and insulin resistance.

In previous research led by Fredrik Bäckhed, Professor of molecular medicine at the University of Gothenburg, demonstrated that diabetes can be linked to a changes in the composition of intestinal bacteria, which increases the production of molecules that may contribute to the disease.

His group has shown that the altered intestinal microbiota leads to altered metabolism of the amino acid histidine, which in turn leads to increased production of imidazole propionate, the molecule that prevents the blood sugar lowering effects of insulin.

An article published in the journal Nature Communications now confirms the initial findings in a large European study with 1,990 subjects, which shows that patients with type 2 diabetes from Denmark, France and Germany also had increased levels of imidazole propionate in their blood.

“Our study clearly shows that imidazole propionate is elevated in type 2 diabetes in other populations as well” says Fredrik Bäckhed, and continues:

The altered gut microbiota observed in people with type 2 diabetes has fewer species than normal glucose tolerant individuals, which is also linked to other diseases. The researchers speculate that this leads to an altered metabolism of the amino acid histidine.

The EU-funded research collaboration MetaCardis has been led by Karine Clément, Professor of Nutrition at Sorbonne University and Assistance Publique Hôpitaux de Paris, a direction of an INSERM group in Paris.

“Interestingly enough, our findings suggest that it is the altered intestinal microbiota rather than the histidine intake in the diet that affects the levels of imidazole propionate”. She continuous:

One problem with research on microbiota and various diseases has been limited reproducibility. By studying the products that the bacteria produce, the metabolites, one focuses on the function of the bacteria rather than on the exact species in the intestine. Fredrik Bäckhed

Title: Imidazole propionate is increased in diabetes and associated with dietary patterns and altered microbial ecology 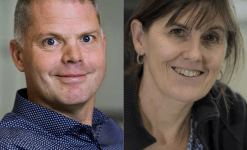 Households need financial support if Covid-19 restrictions are to be successful in Malawi. Furthermore, the authorities issuing the restrictions have an additional bearing on their enforceability. These are findings from a new study examining the relationship between authorities and civil compliance in one of the world’s poorest countries. In April 2020, then-President Peter Mutharika and […]

Ongoing support for several years and focus on the individual. These are success factors that make physical activity on prescription a workable concept for patients, including those who, after six months, have not reached their desired physical activity level, a University of Gothenburg thesis shows. The thesis concerned comprises studies of 444 patients who were […]